As we collectively try to recover from 2020, TEDxSonomaCounty could be a balm for some, offering inspiration from local speakers, entrepreneurs, performers and thinkers.

The ninth annual event will be virtual, bringing a string of speakers and entertainers to viewers’ homes. To purchase tickets, visit TEDxSonomaCounty.com; tickets are $50 per household.

“We selected our theme after dealing with another year of wildfires and knowing that our community experiences the rockiness of change to an unprecedented degree,” she said.

“As the impacts of the pandemic unfolded, we also wanted a theme that acknowledges that many people have been experiencing fear, anxiety and often a sense of loss — a loss of belonging and a loss of their usual way of life,” she added. “How we deal with these losses is a crossroads moment in our lives, and TEDxSonoma-County helps inspire us to see the light in dark times and help us weigh the pros and cons of our decisions when we approach these crossroads.”

Nine speakers were culled from 60 submissions. Among them are the world’s “first robotic psychiatrist,” Joanne Pransky, who is focused on how we prepare ourselves to live and work with robots. Others include former U.S. diplomat Wilford Welch, who has

written about climate change; Barbara Waxman, a personal coach and advocate for thriving in middle age and later life; Sheila Robinson, CEO of Diversity Women Media, a platform to advance diversity and inclusion, and Ozzy Jimenez, CEO of Noble Folk Ice Cream, vice mayor of Healdsburg and the first Latino councilmember for the city in nearly 30 years.

As for the entertainers, they include blues musician Johnny Sansone and the San Francisco Gay Men’s Chorus.

An interactive format will invite connection, appealing to viewers with concerts and even a group stretch.

Organizers expect the audience to be predominantly multigenerational families in Sonoma County, with extended family and friends tuning in from across the country.

TEDxSonomaCounty is a local organization that’s an offshoot of TED, the global foundation known for its TED Talks devoted to “ideas worth spreading.”

TED was conceived in 1984 as a conference to bring together the worlds of technology, entertainment and design.

The local organization operates with a free license from TED, and neither organization profits from the events they hold.

TEDxSonomaCounty was initially created as part of Sonoma Country Day School’s mission to serve a public purpose and to share its Jackson Theater with the greater community.

But the volunteer committee now extends beyond the people affiliated with the school.

“We believe this is a time when we can offer an afternoon of inspiration, entertainment and big ideas that can be discussed long after the program,” Nagel said.

“We can offer new and innovative practices for dealing with the challenges we all face at crossroads moments that can be integrated into our lives.” Wine writer Peg Melnik can be reached at peg.melnik@pressdemocrat.com and 707-521-5310. 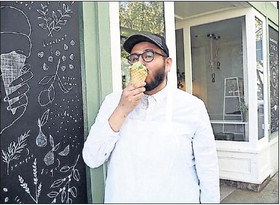