Democratic majority whip said of the security perimeter at the Capitol

Law enforcement wants it to stay, others want it gone

WASHINGTON — Nobody, it seems, wants to keep the security fence around the U.S. Capitol anymore — except the police who fought off the horrific attack on Jan. 6.

Lawmakers call the razor-topped fencing “ghastly,” too militarized and, with the armed National Guard troops still stationed at the Capitol since a pro-Trump mob laid siege, not at all representative of the world’s leading icon of democracy.

“All you have to do is to see the fencing around the Capitol to be shocked,” Delegate Eleanor Holmes Norton, D-D.C., said in an interview Friday.

How to protect lawmakers, while keeping the bucolic Capitol grounds open to visitors has emerged as one of the more daunting, wrenching questions from deadly riot. Not since the terror attacks of Sept. 11, 2001, has security been so elevated, and the next steps so uncertain, for the Capitol complex.

Five people died after the mob stormed the building trying to stop Congress from certifying President Joe Biden’s election over Republican Donald Trump. The former president was impeached by the House, and acquitted by the Senate, for inciting the insurrection.

The U.S. Capitol Police has asked for the fencing and the National Guard to remain, for now.

Police officers are working grueling round-theclock overtime shifts after being overrun that day, engaging at times in hand-tohand combat with rioters outfitted in combat gear and armed with bats, poles and other weaponry. One woman was shot and killed by police and an officer died later, among scores of police injured in what officials have said appeared to be a planned and coordinated assault.

With warnings of another attack in early March by pro-Trump militants and threats on lawmakers that have nearly doubled since the start of 2021, the police, the Pentagon and lawmakers themselves are wrestling with how best to secure what has been a sprawling campus mostly open to visiting tourists and neighborhood dog walkers alike.

“The attack on the U.S. Capitol on January 6th forever changed how we look at the ‘People’s House,’” acting Capitol Police Chief Yogananda Pittman said in written testimony before Congress in February.

She said that even before the 9/11 attacks, security experts, including former chiefs of police, argued that more needed to be done to protect the Capitol complex. “The Capitol’s security infrastructure must change,” Pittman testified.

While some lawmakers say privately they appreciate the heightened security, taking down the protective perimeter and easing the National Guard’s presence is the one issue that appears to be uniting both Democrats and Republicans in the toxic political environment on Capitol Hill since the deadly riot.

One option that has emerged is for a mobile, retractable barrier that could be put up as needed.

“What we have now, that’s just unacceptable to me,” Sen. Dick Durbin of Illinois, the Democratic majority whip, told reporters. “It’s just ghastly, it’s an embarrassment. If there’s a better way to protect us, I want to see it. I want to work to get it.”

Lawmakers described their unease at arriving for work each day in what can feel like a war zone. The absence of tourists snapping photos of the Capitol dome or constituents meeting with representatives is an emotional loss on top of COVID-19 restrictions, they said. The security perimeter extends far beyond the Capitol itself through neighboring parks and office buildings.

The Senate Republican leader, Mitch McConnell of Kentucky, compared it to a combat zone in Afghanistan.

“I think we are way overreacting,” he said at a press conference.

As of Friday there were about 4,300 Guard troops in the city. This week, Defense Secretary Lloyd Austin formally approved the Capitol Police request to extend the deployment of nearly 2,300 Guard members for about two more months.

The pushback from Capitol Hill was immediate and bipartisan.

Top Republican senators on the Senate Armed Services, Homeland Security, Intelligence and other committees downplayed the potential threats to the Capitol, especially weighed against the drain on National Guard troops serving far from their homes.

“Our National Guard troops, who serve with great honor and distinction, are not law enforcement officers, and we will not abide the continued militarization of Capitol complex security,” wrote Sens. James Inhofe of Oklahoma, Rob Portman of Ohio, Marco Rubio of Florida and others.

“We are deeply troubled by the current level of security around the United States Capitol,” wrote the House Armed Services Committee’s Democratic Chairman Adam Smith of Washington and Rep, Mike Rogers of Alabama, the top Republican in a joint statement.

They said while there is no doubt “some level” of support from the National Guard should remain in the region to respond to threats, “the present security posture is not warranted at this time.”

Still, other lawmakers say privately they are comfortable keeping security high, for now, as the country tries to ease back to a sense of normalcy after the devastating attack on the seat of government.

A sweeping security review conducted in the aftermath of the riot by a task force led by retired Army Lt. Gen. Russel Honoré recommended eventually replacing the barrier with mobile fencing and “an integrated, retractable fencing system” that could be deployed as needed.

Coupled with the hiring of 350 additional officers, the report also recommends establishing a permanent “quick response force” within the Capitol Police but also at the National Guard in D.C. for emergencies. 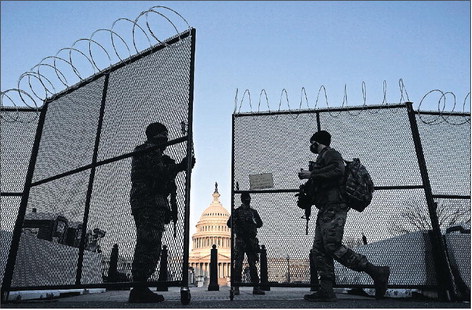