Behind the veil of bright spring grass and foliage, blackened limbs of burned trees and manzanita are stark reminders in Foothill Regional Park of the recovery underway from the 2019 Kincade fire.

There are other signals too — renovated trails, new metal signposts and a brand new, 40-foot steel and concrete bridge installed last month where once a wooden span stood.

A fair amount of work is still needed to repair what was damaged and to update the 211-acre park so it is more resilient in the event of future wildfires. And Sonoma County Regional Parks just got a major boost in the form of a $500,000 grant from Kaiser Permanente.

The grant, awarded to the nonprofit Sonoma County Regional Parks Foundation, will allow for restoration and improvements designed to help the park better weather future fires but also enable firefighters to use the park more efficiently as a community buffer if the need arises, said Bert Whitaker, Regional Parks’ director.

Denizens of Windsor and the rest of Sonoma County have long appreciated Foothill as a welcoming spot for hiking, biking and fishing — a rural wilderness 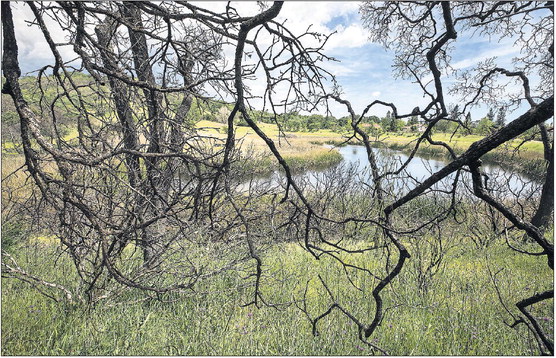 Then one day in October 2019, four days into the massive Kincade fire, it became the front line in an epic battle to spare the town of Windsor from destruction, highlighting, as most recent wildfires have, the important role of parks and open spaces as community buffers in the age of catastrophic infernos.

Park officials now intend to include in the restoration work fireproofing, like stone retaining walls and armored footbridges, to replace wooden ones that were incinerated, as well as features like the concrete and rocked footings of the new steel bridge now in place on the Oakwood Trail in the far northeast reaches of the park.

In addition, officials are working out engineering that will result in buried water lines and other equipment that would allow firefighters to draw water directly from three park ponds, bypassing the need link hoses from fire hydrants in town, Whitaker said.

Officials also plan to widen the cleared margins of some trails so that they can be used for emergency vehicles. The trails themselves will still be single-track, but the wider clearances will enable temporary vehicle use and help serve as fire buffers.

“The hiker still has the experience of feeling like they’re hiking in a natural park, but at the same time the trail is prepared so that if the emergency access is needed, it still has the single track experience, but the sides have been cleared so emergency vehicles would really be able to pass without a lot of clearing,” said Melissa Kelley, executive director of the parks foundation.

The idea is to create adaptive design that may be replicated elsewhere, as well.

The 77,758-acre Kincade fire, Sonoma County’s largest wildfire on record, destroyed 174 homes and spurred the evacuation of nearly 200,000 residents from Windsor and Healdsburg to the Sonoma Coast. Its cause, according to Cal Fire, was PG&E power equipment that failed amid high winds. The company is contesting the bulk of 33 criminal charges brought by Sonoma County District Attorney Jill Ravitch against the utility for its role in the disaster.

The wildfire burned through 95% of Foothill Regional Park, ravaging human-made infrastructure and scorching much of the landscape, but ultimately providing a “fairly healthy burn” in much of the oak woodland areas, Whitaker said.

Some of the park was reopened mere weeks after the flames threatened the entirety of Windsor, a boon when the COVID pandemic arrived a few months later and many people rediscovered the region’s open spaces. But it wasn’t until last month that the remainder was declared open to visitors, with the installation of the new bridge on the Oakwood Trail, Whitaker said.

In the meantime, extensive trail work and restoration has been underway, including efforts to add switchbacks to several trails that were steeply graded. Plans also call for two outdoor “classrooms” and a new entryway designed by local students.

Kelley said a local Kaiser pediatrician, Ari Hauptman, who also sits on the parks foundation board, had been advocating with Kaiser managers for a Sonoma County parks grant which grew into the recent fire recovery award.

“Where we live has a significant impact on our health and well-being, and we believe that good health is a fundamental right for all,” Tarek Salaway, senior vice president and area manager, Kaiser Permanente Marin-Sonoma, said in a written statement. “That is why we focus on making real and lasting change for the people who live, learn, work, and play in the communities we serve.”

Kaiser Permanente similarly provided a $500,000 grant to rebuild the nearly 6-acre community park in Coffey Park that was blackened by the Tubbs fire in 2017. The new, $3.3 million park reopened last fall, bringing a fresh spark of life to the nearly rebuilt neighborhood, where more than 1,400 homes were razed by the wildfire. You can reach Staff Writer Mary Callahan at 707-5215249 or mary.callahan@pressdemocrat.com. On Twitter @MaryCallahanB. 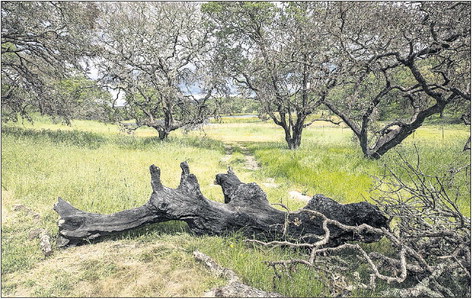