FOR THE PRESS DEMOCRAT

California’s oncea- year wildflower superblooms — hillsides of orange California poppies, carpets of blossoms in the high desert — draw crowds each spring. But few are familiar with the flashy seasonal bloom that erupts in vivid pink in the forested coastal hills of Sonoma and Mendocino counties.

In early May, in time for Mother’s Day, large flower clusters of the native Pacific rhododendron splash color among shady ferns in green glades of redwood, fir and hardwood.

The showstopping blooms grow wild along trails in several North Coast locations in mid spring, notably in the 300acre Kruse Rhododendron Reserve and at Salt Point State Park, an hour’s drive north of Jenner along Highway 1.

The rose-pink blossoms in the Kruse reserve are the legacy of a wildfire that burned there decades ago. In its natural cycle, fire clears patches of deeply shaded forest, thinning trees and creating openings that allow sunlight to reach the forest floor. Fast-growing understory plants, like the native rhododendron, take advantage and spread into the gaps. The result is a forest studded with woody rhododendron shrubs that, come spring, burst all together into sprays of blooms on branches up to 25 feet.

Kruse has 3 miles of moderate hiking trails through the second-growth redwood and hardwood forest, which also bloom with native orchids, lilies, violets and other wildflowers. The number of rhododendron blooms varies year 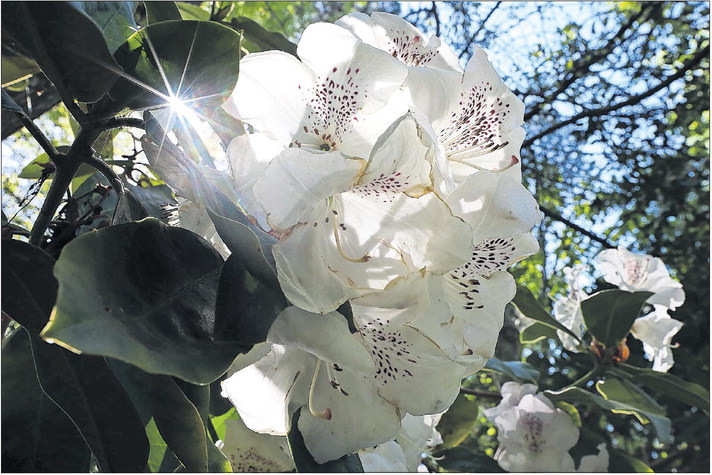 to year with conditions, and over time as the forest has regrown, the rhododendrons in Kruse are being steadily shaded out. But they still put on a magnificent display.

Rhododendron flowers grow in clusters of five to 15 blossoms, known as tresses, and each branch often carries multiple tresses. Some blossom among the trees at eye level, but to find others along the trail, watch for fallen petals on the ground, then look up to see them arching overhead.

Kruse contains California’s two native species of rhododendron. Both are woody shrubs and heavy bloomers. In addition to the pink Pacific species, local hills host the R. Occidentale, or western azalea, which is white with a yellow throat and highly fragrant. In full bloom, the mass of flowers fills an entire outdoor area with heady perfume.

Rhododendrons have been growing in California for at least 25 million years, fossil records show, but the genus is also wildly successful and widely distributed worldwide. More than 1,300 species are known to grow in places as diverse as China’s forests, Switzerland’s mountains, New Guinea, Nepal and North Carolina.

Those natural specimens come in colors ranging from pale yellow to pure white to flame orange, shades of pinks and vibrant reds, even blue and purple, some with markings on the throat, bi-colored or tinted petal fringes, with flowers as wide as a hand or small as straws. Some bloom early, in April, while others bloom late into the summer. But the time to see the most is usually the first two weeks of May.

Those who want to see cultivated and wild rhododendron blooms in more accessible conditions can visit Hidden Forest Nursery in Sebastopol. There, Mike Boss is literally surrounded by acres of rhododendrons in his nursery, formerly a multiacre collection known as the Sonoma Horticultural Gardens. In addition to lath houses with potted rhododendrons, azaleas and camellias, Hidden Forest spreads out into a natural canyon under a canopy of trees, with wandering paths along a creek and a reflecting pond.

Hundreds of varieties of spectacularly blooming rhododendrons, many collected and cultivated for decades by the previous owners, open from April to June, depending on the variety. By design, the setting has an almost wild feel, with birds and wooded trails, vibrant overhanging blossoms and color- lined paths.

Boss stepped in to buy the legacy collection and business just before the land was sold for a planned development. He said it’s been a labor of love to restore and care for the 50-year-old nursery. He’s a certified permaculturist and owned a landscape business before taking on Hidden Forest.

Today, he runs one of the few independent rhododendron nurseries left in the state. Collectors visit arrive from around California and even abroad. Among the staff, Armando Garcia, who has cared for the varieties in the gardens for more than 30 years, has an expert’s knowledge of each kind and where they’re located around the 7 acres.

A number of the rhododendron plantings in Hidden Forest are massed together, creating multicolored and multitiered blooming displays beneath branching trees that provide essential shade.

If you’re willing to travel a little farther to see these blooms, head to the Mendocino Coast Botanical Gardens just south of Fort Bragg with its acres of varieties planted among paths in a rolling, park-like setting. Jim Celeri, a former Fort Bragg rhododendron nursery owner and fourth generation North Coast resident, oversees their care.

After 10 years in the gardens, he still marvels at the variety of blooms and their beauty: the Sultans, which form a 50-footlong hedge of yellow flowers; the Noyo Chief, with their nearly fluorescent red petals, dark green leaves and almost perfectly rounded shape, and the tender varieties, with their trusses hung 20 feet in the air above thick, branching reddish trunks. One specimen, planted nearly 60 years ago, has a canopy of red flowers about as wide as the length of a school bus.

The Mendocino coast, and Fort Bragg in particular, is the rhododendron capital of the world, Celeri said with absolute conviction. Breeders, collectors and growers have been cultivating them here since the late 1800s.

“We have perfect conditions for rhododendrons here: climate, soil, water and sun,” Celeri said. The plants are also deer-proof, which makes them a reliable substitute for roses and other flowering plants that would otherwise end up grazed. Early European settlers, who came to log the forests and ranch, fell in love with rhododendrons. For some, collecting and breeding the plants became a near-obsession and raising them can become a lifelong addiction, Celeri said.

By 1924, a Dr. Paul Bowman and his wife had established a rhododendron collection in Fort Bragg that was acknowledged to be the largest of its kind in the United States. Many of the Mendocino gardens’ prize plants have been donated from local collections, painstakingly bred over generations.

The rhododendron passion is a worldwide phenomenon, Celeri said. The flower’s beauty had attracted the interest of western Europeans by the 1700s, and in the mid-1800s intrepid plant explorers were sailing around the globe, risking life and limb in often impenetrable forests, in search of rare and unique specimens. Those exotic and colorful species were bought by nobility and gentry for estates and formal gardens, and the competition to own the most unusual was tough. As demand grew, it wasn’t long before plant breeders began experimenting with mixing colors and plant shapes by hand.

Today, thanks to the efforts of generations of collectors, there are thousands of rhododendron varieties in a staggering range of colors, scents, shapes and growth habits. And new ones are being introduced every year.

Celeri and the Mendocino gardens host an annual rhododendron show in May, where the best of breeds are brought to be shown, judged and admired. Celeri said they have about 1,000 entrants each year, and the competition is fierce.

“We consider the show a success if all the contestants go home still friendly,” he said.

This year, because of COVID-19, the annual event has been shifted to an online Rhodo Photo Show.

Both the Mendocino Gardens and Hidden Forest Nursery have varieties for sale to collect and plant in home gardens. Stephen Nett is a Bodega Bay-based Certified California Naturalist, writer and speaker. Contact him at snett@californiasparks. com 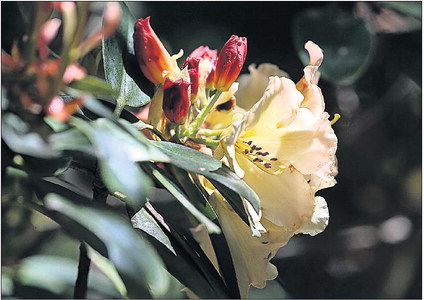