The Glass fire charged over the Mayacamas Mountains on Sept. 27, torching six homes at Oakmont Village and forcing the evacuation of the 55-andover community near Santa Rosa.

Heroic work by firefighters prevented far more serious losses. Questions remained, in the aftermath, about whether Oakmonters should have gotten more notice, before being told to evacuate, and why it took so long for many to get out of the neighborhood, once they were told to go.

In November, Steve Spanier quietly informed the Oakmont Village Association board that, after three years as its president, he was resigning to tend to family obligations. The board recently voted to elevate vice president Tom Kendrick to the presidency.

Kendrick, 71, is a retired hightech executive who spent much of his career with Hewlett-Packard in the Silicon Valley.

“I always tell people anybody can be on the board,” he said, “as long as they’re willing to do a lot of work for free — these are volunteer positions — and have a tolerance for criticism.”

As former president of the village’s Pickleball Club, Kendrick is no stranger to controversy. During an interview earlier this week, he discussed the most pressing issues facing Oakmont, from fire safety to COVID-19 to what’s going on with those golf courses. The interview has been edited for brevity.

Q: What’s job one for you right now?

A: Number one is fire safety. One of the comments we heard repeatedly from the fire department was that Oakmont was very fortunate in that, as the fire 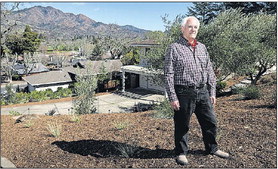 was coming across Highway 12, the wind died. If we hadn’t had that shift in the wind, we might’ve lost a very large fraction of the community. We’re looking at what we can do to prevent really serious, devastating fires that could take out big chunks of Oakmont.

Q: What can you do? What steps are people taking?

A: There’s been a tremendous effort in the last few months to make Oakmont a whole lot more fire safe. We’re focused on clearing a 5-foot area around houses, so that as embers fly, they won’t burn structures. We’re also focused on certain plants that are known to be highly problematic for spreading fires and throwing a lot of embers. One of the ironies is that we live in a drought-prone zone, so people have drought-tolerant plants. But if you draw a Venn diagram with a circle for drought-tolerant plants, and a circle for plants that burn easily, they’re the same two circles.

One plant we’re trying to deal with fairly quickly is junipers, which are probably the most frequently planted shrub in Oakmont.

At my house, we had them all removed, and replaced. Although as people are pointing out, getting rid of junipers isn’t easy, and it’s not cheap. But losing your house isn’t cheap, either.

Q: Yet again, it took many Oakmonters a long time to evacuate, some as long as two hours. Is that a concern?

A: Egress is the issue that always comes up. The way Oakmont was designed, we have essentially two roads that take us out, and they both take us onto Highway 12, which becomes a parking lot, every time there’s a fire. So that’s another area we’ve continued to look at.

We’re also looking at: How do we respond better, and how can we get better warnings? Because the most recent one wildfire was rather abrupt. We were aware there were fires in Napa County, we kept hearing about the winds picking up, the fire spreading very quickly, and Oakmont was kind of taken by surprise. The warnings we got were: “Get ready to go,” followed within about a half hour by “Leave.”

Q: Aside from a handful of coronavirus cases at the Oakmont Gardens apartments in July, it seems you’ve had relatively few infections at Oakmont. Is that a success story?

A: We’ve been either prudent or lucky. I think a combination of the two. We’ve had a few cases that we know of, but very few. Because of medical privacy, there’s no requirement that anybody report positive tests to the board.

We’ve been very attentive to the rules, closing buildings when the county recommended it, and we’ve reopened things pretty gingerly, with strict rules. Also, we’re a little isolated out here. The quote you always hear is, ‘Oakmont: 20 minutes from everything.’ Because we’re a little out of the way, we haven’t been hit as hard.

Q: Do you have a sense of percentage of Oakmonters vaccinated so far?

A: We know that about 1,000 people were vaccinated when we had a clinic here a few weeks ago. That’s a little more than 20% of Oakmont. Other people in the age group initially targeted by the county, 75 and older, were getting vaccinated other places. Our guess is, we’ll be up to about 50% relatively soon.

Q: Advance Golf Partners, your lease partner to run Oakmont’s two golf courses, bailed in July, with Petaluma’s CourseCo taking over on short notice. Since then, you’ve signed a long-term deal with them. How’s that going?

A: On balance, we’re extremely happy. The golfing side of the operation is going very well.

On the hospitality side with the two restaurants on the golf club grounds, there’s been a lot of deferred maintenance over the last five years, so that’s piled up. We’ve started to deal with it, but it’s a long road, made more complicated by the fact that everything’s been closed for a year. A lot of the work’s been done. We’re about ready to reopen things.

On the whole, I can characterize the relationship as uniformly positive. We’re cautiously looking forward to a point when things are running so well we don’t have to worry about it anymore. You can reach Staff Writer Austin Murphy at 707-521-5214 or austin. murphy@pressdemocrat. com