Administration accused of attacking protesters to clear square for photo

WASHINGTON — A U.S. judge on Monday dismissed most claims filed by the American Civil Liberties Union of D.C., Black Lives Matter and others who in lawsuits accused the Trump administration of authorizing an unprovoked attack on demonstrators in Lafayette Square last year.

The plaintiffs asserted the government used unnecessary force to enable a photo op of Trump holding a Bible outside of the historical St. John’s Church. But U.S. District Judge Dabney Friedrich of Washington called allegations that federal officials conspired to make way for the photo too speculative.

The judge’s decision came in 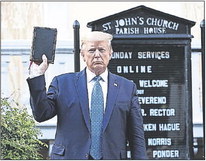 a 51-page opinion after the Justice Department requested she toss four overlapping lawsuits naming dozens of federal individual and agency defendants, as well as D.C. and Arlington police, in the June 2020 incident.

Friedrich also ruled that federal defendants such as then-attorney general William Barr and then-acting Park Police chief Gregory Monahan are immune from civil suits and could not be sued for damages, and that Black Lives Matter as a group could not show it was directly injured by actions against individual demonstrators.

The judge did allow litigation to go forward challenging federal restrictions on protests and other First Amendment activity at Lafayette Square across from the White House, and against local D.C. and Arlington County police agencies who supported the operation.

The lawsuits stem from confrontations last June when military along with federal and local law enforcement forcibly cleared the square. Officials used batons, clubs, spray and fired projectiles as more than 1,000 largely peaceful demonstrators gathered to protest the killing of George Floyd. Images of violence before President Donald Trump made his way to the church drew a national backlash and the nation’s top military official later apologized for walking with Trump before television cameras that day.

On Monday, Friedrich rejected as “conclusory” allegations that Trump, Barr and former defense secretary Mark Esper directed a conspiracy to violate the civil rights of demonstrators just before the park was cleared.

Friedrich acknowledged claims that Trump tweeted threats and encouragement of violence against protesters, and ordered Barr take charge of the situation before Barr mobilized law enforcement and appeared at the square just before it was cleared.

The judge also said the square was cleared right before Trump, Barr and Esper’s walk to the church. But these events weren’t enough to support other allegations of unlawful acts, Friedrich wrote.

“Merely alleging that the defendant officials communicated, without alleging any details of those communications that suggest an unlawful agreement, cannot justify inferring the requisite agreement for a … conspiracy” violating protesters’ constitutional rights, the judge said.

Friedrich cited “obvious alternative explanation[s]” for Trump and others’ actions, including possible violence by demonstrators, the need to enforce an impending citywide curfew that evening and ensuring the safety of a presidential movement across the square.

The judge also rejected plaintiffs’ push for a court order requiring the government to change its useof- force practices against protesters, saying those suing could not show any ongoing or future threats of injury now that they have dispersed and the square has reopened.

A spokeswoman said the Justice Department declined to comment.

In a statement, ACLU of the District of Columbia legal director Scott Michelman said under the judge’s decision, Lafayette Square is “now a Constitution-free zone” when it comes to the actions of federal officials.

“Today’s ruling essentially gives the federal government a green light to use violence, including lethal force against demonstrators, as long as federal officials claim to be protecting national security,” Michelman said.

“Not only is this decision a stunning rejection of our constitutional values and protesters’ First Amendment rights, but it effectively places federal officials above the law.”

Michelman called the violence at Lafayette Square a stain on the nation’s commitment to the Constitution.

He also said Congress should pass legislation affirming that federal officers, not just state and local ones, can be sued when they violate individuals’ rights.

As other parts of the litigation were allowed to proceed, other plaintiffs claimed victory, including Gibson Dunn partner Randy Mastro, private counsel for three young women who filed suit.

Mastro said that because the judge allowed claims from demonstrators alleging they suffered retaliation for exercising their First Amendment rights to move forward, they will now be able to obtain evidence of federal communications with Arlington and D.C. police. The information, Mastro said, could help determine what happened and who ordered what. He added that plaintiffs would appeal other parts of Friedrich’s decision.

“We are gratified that the Court has recognized so much of this case can now proceed and that it should ‘have been clear to every reasonable officer at the time it occurred’ that the violent clearing of Lafayette Park without any basis would have been unconstitutional,” Mastro said in a statement.

“But we will continue to seek justice against those federal officials who succeeded in getting certain claims dismissed against them, and intend to appeal those rulings, because we aim to see to it that something this horrific never happens again in our country.”

The Justice Department had urged dismissal of the suit, saying U.S. officials are immune from civil lawsuits over police actions taken to protect a president and to secure his movements in a hearing held earlier this month a year to the week after Floyd’s death.

In court, Michelman argued that dismissing the lawsuits outright would “authorize brutality with impunity” at one of the most symbolic spaces within the seat of the federal government in Washington.

Litigants also argued that Trump and his allies have given shifting and conflicting explanations for how, why and who ordered protesters to be cleared.