Despite a sustained and vocal effort to distribute the coronavirus vaccine equitably among Sonoma County residents without regard to their wealth or race, there are significant gaps in immunization rates among local neighborhoods, forcing the county to make up ground from the start of its campaign to improve health equity during the pandemic.

A Press Democrat analysis of vaccination numbers in 32 ZIP codes that either wholly or partially fall within the county reveal an unmistakable disparity between some of Sonoma County’s wealthier neighborhoods and its more socioeconomically disadvantaged.

It’s a story as old as civilization: Life is healthier for those with resources.

“What makes us believe the systems that lead to inequality in housing, education and health care don’t also apply to COVID-19?” said Pedro Toledo, chief administrative officer of Petaluma Health Center. “I think we need to recommit ourselves to providing access to the vaccine for groups that are disproportionately impacted by COVID, low-income communities in particular.”

Following the state’s lead, the county is charting vaccination rates according to ratings on the Healthy Places Index, or HPI, a measurement of census tracts based on income levels and quality-of-life factors such as access to health care, education

and transportation. Tracts with similar ratings are placed into one of four groups, or quartiles, and public health officials and political leaders are using them to evaluate the fairness and effectiveness of the vaccination campaign.

The lowest economic quartile in Sonoma County has received 20% of the doses thus far, a share that climbs to 23%, 26% and 31% for successively better-off populations. Charting the percentage of residents in each quartile who have received at least one vaccine dose shows a similar trajectory.

All of these figures measure rates for everyone 16 and older. They include Sonoma County residents who were vaccinated outside county limits, but exclude out-of-county residents who got their doses here, said Kate Pack, the county’s chief epidemiologist.

The gaps between economic levels is precisely why the state of California added an equity metric to its vaccination campaign on March 4. At that time, the lowest-quartile communities in the state were receiving 16% to 17% of the overall vaccine supply, as opposed to 34% for the highest quartile.

That uneven playing field has ravaged many poorer neighborhoods, where crowded living spaces, prevalence of underlying health conditions and uneven access to medical care creates higher risk of contracting COVID-19. And because so many workers in these areas have essential on-site jobs, including a high concentration in food production, their risk is transferred to the broader community.

To address the problem, the state began setting aside 40% of all vaccine doses for California’s poorest ZIP codes. As of Friday, the gap had narrowed a bit, with 19% of all doses now having gone to the lowest quartile, and 30.7% to the highest.

To make matters confusing, counties divide up tracts by socioeconomic status to create their own quartiles. California does the same, but on a statewide level. And none of the state’s most disadvantaged communities are in Sonoma County. It’s a sore spot for some local community activists, who are quick to point out we are getting no “equity doses” despite pockets of significant poverty in Sonoma County.

Using the state’s quartiles as a guide, though, the vaccine disparity between Sonoma County neighborhoods is clear. Of the five county ZIP codes in California’s second- lowest HPI, three are among the least-vaccinated ZIPs in the county. Those wouldbetherugged,coastaladjacent area around Annapolis (95412, a tract that, as Sonoma County Supervisor Lynda Hopkins pointed out a recent board meeting, includes the home base of the Kashia band of Pomo Indians), where only 20.9% of residents have been immunized; the Roseland neighborhood and other predominantly Latino blocks of southwest Santa Rosa (95407), which has a 23.4% vaccination rate; and the area around Guerneville (95446), which is at 28.8%.

The median for the county’s 32 represented ZIP codes is about 37%.

Acknowledging the need to increase vaccinations in Roseland, DEMA Consulting & Management had been running a county- supported clinic at the library there, but it hasn’t been operating lately.

“DEMA was intended to be a temporary operation and officials are expecting to announce a new permanent clinic in Roseland soon,” county vaccine site coordinator Ken Tasseff said.

On the other end of the bar graph, one of the most heavily vaccinated ZIP codes — 95452, the Kenwood area of Sonoma Valley — is among the nine Sonoma County ZIP codes in the state’s highest quartile. About 55% of residents there have received at least one dose.

While not surprising, the intersection of wealth disparity and vaccination disparity here is complex.

The rollout began in mid-December with health care staff, and the first expansion was to residents 75 and older. The first group skews white, and the second might, too. Data from the Pew Research Center in 2014 said the median age of California’s Latino population was 28 years. That same year, the statewide median was 36, according to the U.S. Census Bureau.

In the early stages of the coronavirus vaccination program, there was a lot of concern that many in the Latino community would be reluctant to accept the shots. Sonoma County has made an effort to address that, arranging to have Spanish-speaking community health workers called “promotoras“ go door-todoor in neighborhoods. Toledo doesn’t believe hesitancy has been a big factor.

Wealthy have leg up

But there are obvious reasons to believe wealthy residents may have a leg up in the pursuit of this precious resource.

“What I’ve seen at our site is, at the end of the day, people waiting to see if there is any leftover vaccine. And those individuals tend not to be essential workers,” Toledo said. “Essential workers in these more vulnerable ZIP codes tend to work two or three jobs just to keep a roof over their heads. They often don’t have access to reliable internet, which is a key part of the COVID-19 vaccination process.”

Any significant effort to bring the vaccine to disadvantaged populations is now being hampered by the sluggish allotment of doses coming into the county. That means most vials are currently being reserved for second doses, making it hard for vaccinators to expand their campaign to groups that haven’t already been addressed.

“Ken (Tasseff) is saying we’re making up that gap by 1% a day,” said Jason Cunningham, CEO of West County Health Centers. “But it’s stalled. We only have two vaccination clinics next week.”

Cunningham cautions against reading too deeply into the county’s ZIP code data, arguing there are significant lags in updating the information, which comes from the California Immunization Registry. Tasseff said the county vaccine dashboard should be an accurate reflection, since the data set is updated daily.

There are other anomalies in the ZIP code chart that go beyond class inequities. For example, the lowest vaccination rate in Sonoma County can be found in 94515, the hilly area near Calistoga at the eastern fringe of the county. Only 13.4% of residents there have gotten a dose. Annapolis is second lowest at 20.9%. Most chalk up those poor rates to remoteness.

Sometimes the reasons are more esoteric. In this case, one particular local provider, Alexander Valley Healthcare, is credited with a thorough vaccination campaign in the north county.

“He has been able to sign up thousands in the local Latinx community, especially among our farmworkers,” Burdick said Wednesday. “He and his team have called people day and night to sign people up. And he can walk into a room full of people who are on the fence about the vaccine, and when he leaves, everyone wants it. I had extra doses today, I called him and he literally sent 10 people right over.”

Hopkins, the west county supervisor, has been vocal about getting doses into Latino neighborhoods. But she argued at the recent supervisors’ meeting that vaccine doses are, in and of themselves, a measure of equity. She raised the idea of targeting the five least-vaccinated ZIP codes in the county at any given time, wherever they may be, with pop-up clinics or a mobile unit.

“Some of these communities are very small, so you could actually make a substantial percentage improvement just with one day and a good-faith effort in partnership with our (local clinics),” Hopkins said. “Can we talk timeline? Can we talk moving metrics on equity? How can we stay nimble, and how can we really target, on a rotational basis, addressing these high-risk communities?” You can reach Staff Writer Phil Barber at 707-521-5263 or phil.barber@pressdemocrat. com. On Twitter @Skinny_Post. 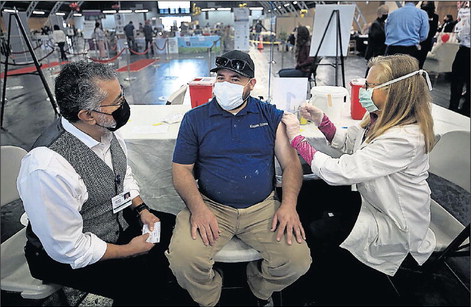